The concept of dating came into existence back in the 1990s. After a few years, online dating got introduced. A lot of people were skeptical about online dating at first. They have not accepted it immediately.

With time, people became familiar with it and started accepting it. Now, the online dating industry has reached a whole new level.

Various dating apps like Tinder, Bumble, Hinge, Happen, etc., are responsible for the success of the online dating industry. These apps have integrated complex algorithms to ensure that users can find the best possible match.

A vast number of entrepreneurs and businesses have joined the dating industry by creating dating sites and apps.

If you are wondering how the online dating industry has reached these heights, then we have got you covered.

Here, we will walk you through the online dating industry statistics, market size, revenue, trends, and more.

Let’s look at these in detail:

Here we walk you through some of the latest online dating statistics worldwide:

According to AlliedMarketResearch, the worldwide dating market size was about US $7.05 billion in 2020 and it is anticipated to grow at a compound annual growth rate (CAGR) of 5.6% between 2021-2028.

As per MarketWatch, the online dating market size is expected to cross $10,378 Million by 2026.

The online dating industry has observed tremendous growth over the past few years. We would notice higher growth of the industry in the years to come.

Some essential factors indicate that the dating industry will have a large market size in the future.

Millennials use these dating apps to find new friends and also their soulmates. They check out the likes, dislikes, and interests of the person before matching with them. The dating app service providers have understood the needs of the users and integrated features accordingly. Due to this, the online dating industry is growing well.

As per Statista, the revenue in the online dating segment in the United States is anticipated to reach US$829m in 2022. The revenue will reach around $901m by 2025.

These figures clearly indicate that the online dating industry will reach a gigantic height in the upcoming years.

Here are some popular trends in the online dating industry.

Various forms of virtual communication, such as video calls, video chats, audio calls, audio notes, etc., gained a lot of attention over the last year. The trend of these things is not going to reduce anytime soon.

According to thezoereport, 65% of users love virtual dating after the social distancing rules were about to get over. Various popular dating apps like Tinder, Bumble, Happn started integrating virtual dating features and saw massive growth over the last year.

The niche dating apps are becoming a new normal. Udolly, the dating app that connects disabled people across the globe. Bikerplanet is one of the leading websites that connect biker singles worldwide.

The pandemic has created a shift in the mindset of users about dating. More and more users now look forward to long-lasting relationships than ever before.

Around 84% of the OkCupid daters look forward to a steady partner post-pandemic.

People have become more aware of their health due to Covid-19 and connect with users with the same belief.

Singles now check their boundaries and only connect with their partners with the same comfort zones. For instance, users who have taken vaccines love to match with the same kind of people.

Various popular dating platforms such as OkCupid, Bumble, and Hinge understood users’ needs and introduced ‘badges’ that indicate the vaccination status or the comfort level with various activities. Bumble dating app allows users to set up their covid dating preferences from their profile.

It is yet another popular dating trend that has evolved over the years. In online speed dating, people are allowed to meet many singles online in a short amount of time. Depending on the conversation, they can decide to start a relationship with a person or not.

One-on-One dating is not going to end anytime soon. With the changing times, the online dating world has understood the importance of community-focused dating. Some of the dating apps now allow dating in groups. Fourplay is one such dating app that is built based on this concept. The app enables users to do double dating. 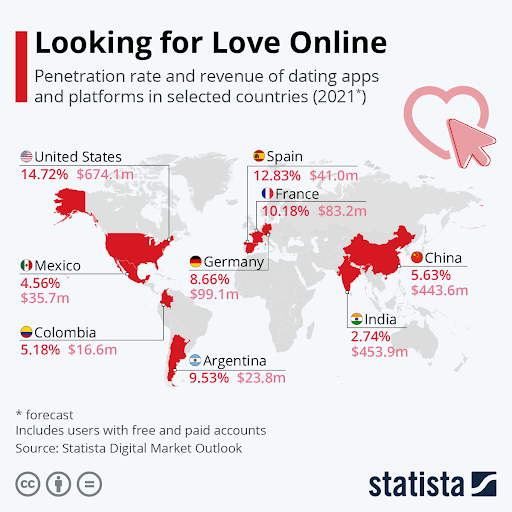 According to PewResearch, three-in-ten adults in the United States have used a dating app or site once in their lifetime. Further, the number changes depending on age and sexual orientation. 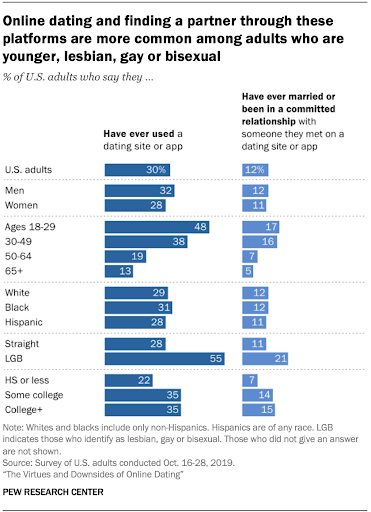 The above image indicates the total percentage of dating users in different communities in the United States. It also states the percentage of users that have been married or been into a serious relationship through online dating.

Many people use dating apps for hookups, finding friends, and also their life partners. Let us have a look at the total number of dating app users across the globe. 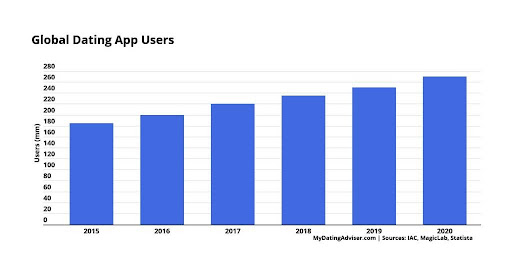 The above table clearly indicates that the number of dating app users increases year on year.

One of the main reasons is that the leading dating giants, such as Bumble and Hinge, have started app marketing for relationships rather than hookups.

Another main reason is the covid-19 pandemic. According to Apptopia, the dating app engagement in the last quarter of 2020 has surpassed the pre-pandemic level.

It also stated that the top 20 dating apps in the US have 17 million daily active users in November 2020. The number indicates that there are 2 million more active users than the previous year.

After knowing the total dating app users worldwide, let us look at the most popular dating app or sites worldwide.

Here is the list of players that are dominating the online dating industry:

Tinder: It is the granddaddy of all the online dating service providers. Match Group owns Tinder. The same company owns over 45 dating apps worldwide. It is suitable for people of all ages and cultures and is generally known for casual encounters. It gives freedom to users to find the best possible date.

Impressed with the success of Tinder and want to create a similar app, then you can refer to this blog on how to create an app like Tinder.

PlentyofFish: The company released its dating site back in 2003. Later, they also released Android and iOS apps. It regards itself as dating for grown-ups. The online dating service provider gets more than 3 million members every day. It allows singles to find happy and healthy relationships.

Match.com: It is yet another pioneer in the online dating industry. It is suitable for users looking for serious relationships and marriage. The users can see comprehensive information about their potential matches.

OkCupid: It is a US-based online dating, friendship, and social networking site that offers its services worldwide. The company has created the site and the app to assist singles in finding love and happiness via meaningful relationships. It allows users to create a detailed bio and profile. Moreover, it connects users based on their interests, beliefs, and quirks.

Bumble: Whitney Wolfe, who was earlier co-founder of Tinder, launched Bumble. It is considered one of the best Alternatives to Tinder.

Bumble allows women to take the first move to start a conversation. It enables users to make meaningful connections, find friends, or expand their professional network.

If you want to create a similar kind of app, you can refer to this blog on how to create an app like Bumble.

Badoo: Badoo is a dating-focused social network that allows users to chat, meet, and date with people worldwide. It was released way before Tinder and Bumble. It enables users to connect with people based on Encounters and People Nearby.

Happn: Happn is somewhat different from other popular dating services. It shows the users’ profiles of the people who they have lately crossed-path in their location.

In-app advertising is one of the most effective app monetization methods to generate shared revenue through views, clicks, or transactions. The method works well with several online dating services. It is highly suitable for dating services that have integrated the swipe-left-right mechanism.

The leading dating app Tinder follows this model. Back in 2014, Tinder released a campaign for Domino’s Pizza on Valentine’s Day. Here, the dating app users were viewing a Domino’s brand profile page as a match.

All the users swipe right to match with the brand, further start the conversation, and have the chance to win a date in the form of Domino’s freebies and deals. Here, users need to send some cheesy pick-up lines. After this, the best ones amongst them will receive rewards. The campaign became highly successful.

It is the most popular monetization model adopted by leading dating apps. The users can download the app and access the primary features for free. To access the additional features, users have to pay a certain amount.

Tinder has adopted this model over the last decade. It has adopted the in-app purchases model for a long time. According to Statista, Tinder became the most popular dating app in May 2021 by raising $ 65.28 million in revenue.

Tinder offers three types of in-app purchases in the form of three subscriptions known as Tinder Plus, Gold, and Platinum. On purchase of any subscriptions, users can access extra features and increase their chances of the match. To know more about the features, you can refer to this blog on Tinder Features.

On the success of this model, various other dating apps like Bumble, Hinge, CoffeeMeetsBagel, etc., also adopted it.

The subscription is one of the most classic models in the online dating world. In this model, users are given a free trial of the app for a specific period. Further, users need to pay a particular amount to access the extra features for a limited time (Weekly or monthly). These payments are generally automatically renewed.

Subscription is the mainstream revenue model of Tinder. To know more, check the Tinder business model.

Moreover, some popular dating sites working as per this model are Match.com, Zoosk, and eHarmony.

Apart from these methods, there are various other ways through which dating apps make money.

We would also observe that social media and dating would come together to help users in dating. Various brands would also support dating platforms to connect users and promote their business.

If you have understood the importance of online dating and want to become part of this ever-growing industry, you can contact us.

GuruTechnolabs is a leading dating app development company. We have helped various individuals and businesses to enter the dating industry through our solutions. Share your vision with us. We will provide you with the best possible solution.

Here are some of the frequently asked questions about on-demand dog walking app:

Q 2. Which country uses online dating the most?

The United States stands in the first position, with 49 million people using online dating services as per Statista. It has a user penetration of 14.72% worldwide.

Q 3. What is the most popular dating app in the USA?

According to Statista, Tinder is the most popular dating app in the USA, with over 51% of users. Bumble comes second with over 32% of users.

Q 4. What is the success rate of online dating?

As per Brides.com, over 60% of users have a positive experience from online dating. Mobile apps have become widely popular among the businesses & service providers, for example,... OTT is one of the latest abbreviations that most people have known lately. It has completely... How to Start a Snow Plowing Business?

Snowfall occurs in many countries worldwide in the winter season. People living in these countries...