Why Should You Use React Native for Mobile App Development? 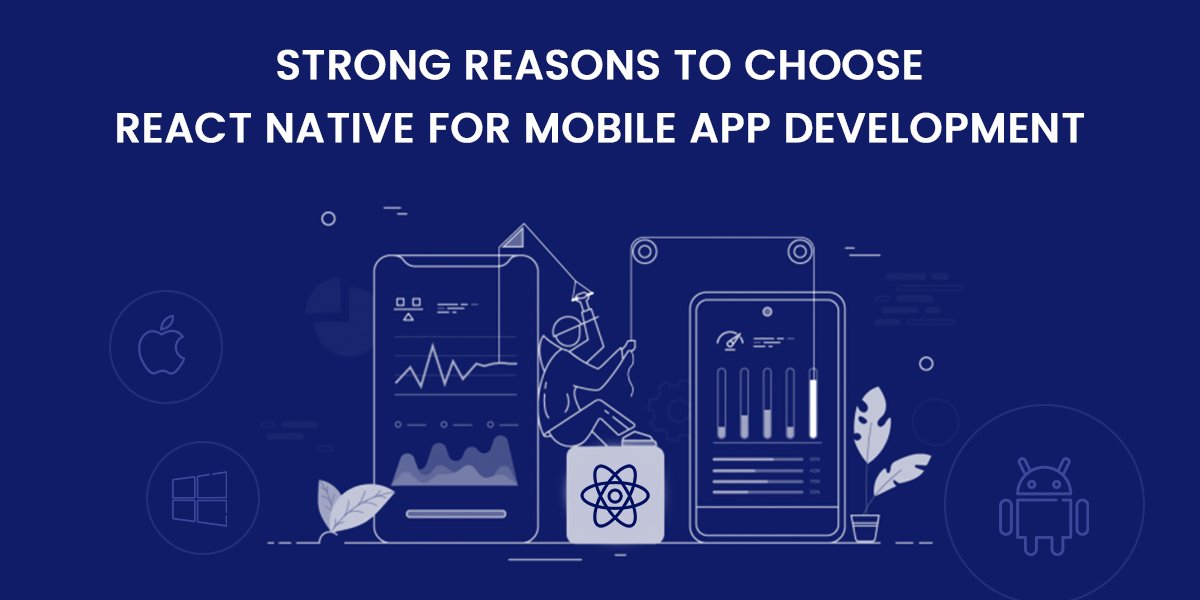 With the constant evolution in the smartphone world, users want to get business details with a flick of a second. On the other side, businesses want to provide a better experience to users on multiple platforms.

Hence, a vast number of cross-platform app development frameworks got released in the market. Out of which, developers at Facebook released an open-source framework known as React Native in 2015.

Over the years, it became famous worldwide, and now, 42% of developers are using React Native. (Statista)

Now, if you are planning to develop a mobile app, React Native provides cross-platform compatibility.

Here, we have done detailed research and found reasons why React Native is suitable for mobile app development.

So, let’s dive deep into it:

Here are some of the most crucial reasons to go with React Native for building mobile apps.

React Native follows the principle of learn once, write anywhere. Here, a developer can use components of a single codebase across various platforms. For instance, you can share the same code for creating an app for Android and iOS platforms.

Here, one requires only a JavaScript developer that is familiar with native platform UI, libraries, and hybrid app development.

React Native provides the feature of a fast refresh. Using JavaScript, React Native allows users to do computing efficiently. Hence, they don’t have to wait for any code to finish. They can save the code and check the outcome in real-time.

React Native allows you to build truly native apps and provide a better user experience. It offers a basic set of native components that align well with the platform’s native UI building blocks. Thus, it is also the reason why React Native is better than other popular frameworks like Ionic or Phonegap.

To provide ditto functionality like a native app, developers have to combine native and React code.

4. Provide Personalized Experience to All Users

The React Native architecture is developed in a way so that you can divide the Framework code, Native Code, JavaScript Code, and Styling. Due to this, developers can integrate various styles on the server-side.

“With the help of React Native, developers can provide a personalized experience to all the users of the app.”

Moreover, it offers next-level personalization, where developers can integrate personalized style for a particular target audience and then provide a personalized experience to them.

5. React Native Helps You Save Money

If you are working on new technology, then money would be the essential aspect. Your primary purpose is to obtain the maximum return on the money invested in moving into the tech-world.

React Native can help you with that.

“Despite hiring two separate developers to build an app for Android and iOS platforms, you can hire a React Native app developer. It will reduce your cost because it is better than hiring individual android and iOS developers.”

Further, developers can carry out maintenance and updates on both apps simultaneously; hence, it saves a lot of your money.

When developing an app using React Native, the foundational level programming language utilizes the main code base for Android and iOS platforms. Due to this, recompiling an app is quick without even touching the framework anytime.

Various other JavaScript frameworks wrap the JavaScript code in a web-view, while React possesses a component for its own appearance.

React manages the rendering part after the completion of this stage and creates a bridge. Using this bridge, developers can render APIs on Android and iOS whenever needed.

React Native framework is modular and inherent. Hence, the developer can understand the entire code that runs an application. Moreover, finding bugs is quite simple using React Native.
Due to this, developers can save a lot of time while transforming web apps into mobile apps.

With the single codebase, there is minimal possibility of bugs in errors in React Native app. Moreover, it enhances the testing process. Hence, you can code less and achieve more.

“Due to this, React Native allows you to proceed with the MVP App Development quickly. Hence, you require fewer modules and more reusable components.”

9. Offers Many Ready-made Solutions and Libraries

One of the essential benefits of React Native is that it gives access to a wide variety of ready-made solutions and libraries. You can utilize these to make the development and testing process simpler in an app.

All the bugs in the app code can be verified by following a method known as linting. Here, ESLINT, an open-source tool helps you achieve the same thing in React Native.

Besides this, you can also utilize multiple tools & libraries available in React Native to develop cloud-native apps.

React Native has a massive community of developers worldwide. As of now, it has got more than 93.5K stars and 2,000+ contributors on GitHub.

To get support from the highly experienced developers for your project, you can reach out to leading platforms like Stack Overflow, Code mentor, etc.

You can also reach out to the popular discord community Reactiflux to get support.

As mentioned earlier, using the same codebase for multiple platforms is one of the significant React Native advantages. Moreover, React Native components are reusable, which means you need to make only one update, and it will be reflected across two platforms.

Due to this, you can provide a seamless user experience on various platforms at the same time.

In the case of a native app, the developer has to be familiar with a particular IDE. While in the case of a hybrid app built using the React Native framework, a developer can utilize the console.org or Nuclide plugin built by Facebook.

Besides this, developers can also utilize a hot reloading feature to carry out error handling in a code in runtime. To know more about the native and hybrid app, you can refer to this quick guide on native vs hybrid app.

Since its inception, React Native has been widely adopted by startups, SMEs, and large enterprises worldwide. Moreover, some leading companies around the world shifted their mobile app into cross-platform app via React Native framework. 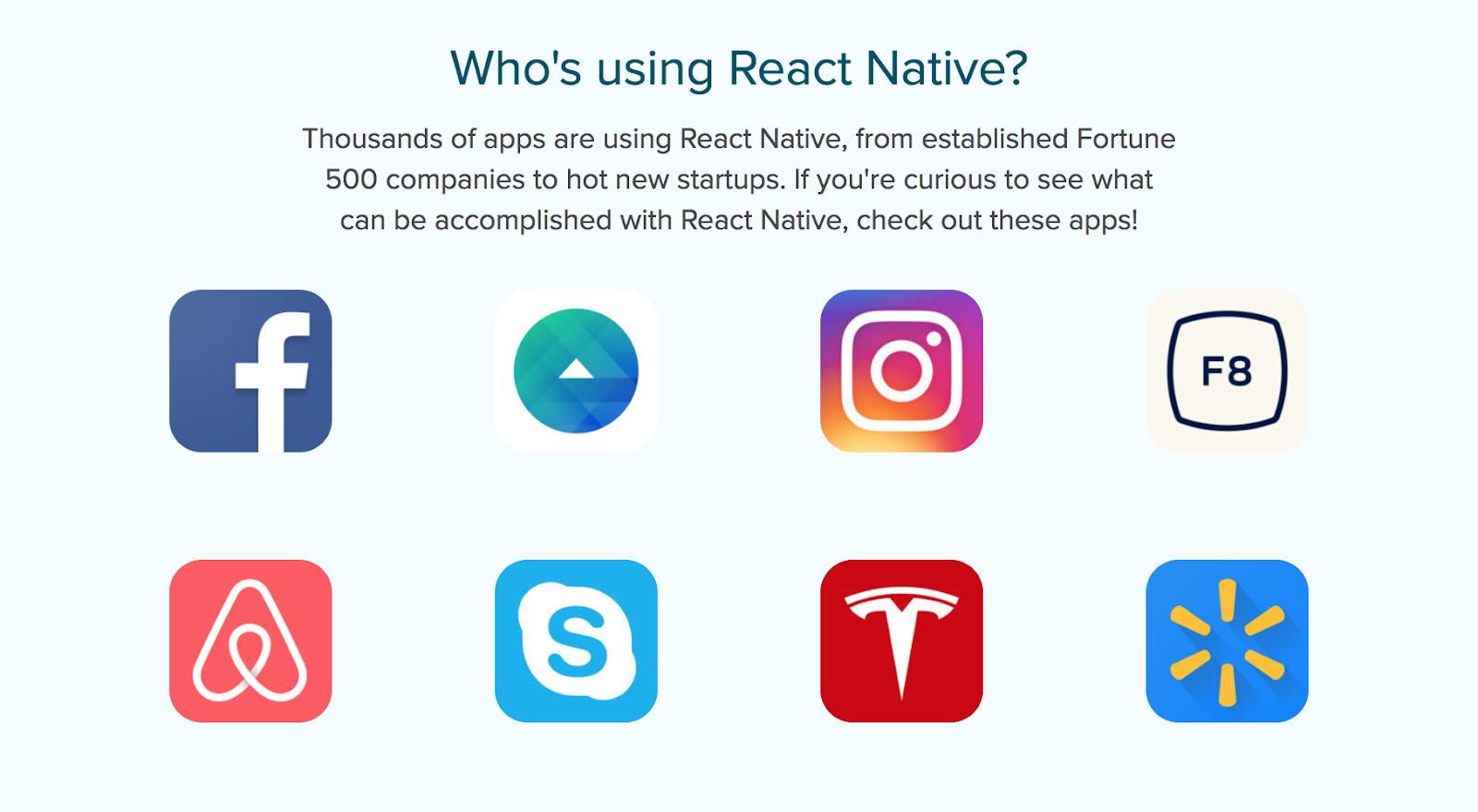 We hope these reasons answer the question, why use React Native for mobile app development.

In a nutshell, to develop a user-friendly, intuitive hybrid app and offer flawless experience to the users, you should go with the React Native framework.

If you want to develop a hybrid app using React Native, don’t hesitate to contact us.

At Guru TechnoLabs, a React Native App Development company, we possess a highly talented team of developers who have delivered hybrid apps to businesses worldwide. Hence, we can understand your business in-depth and provide you the most suitable solution.